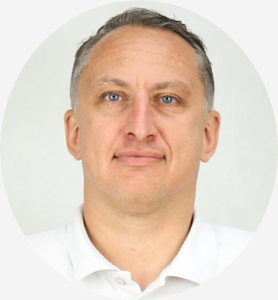 I was born in 1978 and grew up in Považská Bystrica. My basketball history goes back to when I was 10 years old. At this age I got familiar with the game and continued to be dedicated to it ever since. At the beginning it was the position of the player but gradually I started to be interested in the training process throughout my active career. As a player I participated in several basketball camps where I got acquainted with training and its nuts and bolts. In 2002 I became coach in my mother club and along with my colleagues I started to build the brand BK Považská Bystrica. Steadily, we raised a number of players who have developed their potential in domestic as well as foreign leagues and in university competitions too. In 2010 I was given the opportunity to lead the Slovak National Team under 16 at the European Championship/Division B in Tallinn/Estonia as the head coach. Since 2016 I have been working as the assistant coach responsible for videoanalysis in the Slovak National Team. In 2018 I teamed up with Octagon Basketball Europe in order to work out individual highlights for their players and the analysis of their basketball skills.

Responsible for the youth programme and all its aspects of the management, creation and control of the club’s training process. Scouting young players.

2010 – Interaction, leadership and motivation in coaching